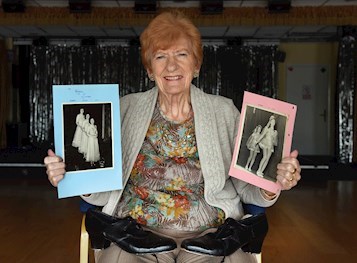 Lilian Calvert started tap dancing when she was just seven years old. It was during the war, and she asked her mother for a shilling for her first lesson. At 81 she's now teaching tap dancing at Lark Hill Village where she lives.

Lilian became a professional dancer when she was 15; part of an act called The Russell Sisters, along with two sisters who lived opposite her in the same street.

They danced and sang and toured, sharing the bill with stars like The Beverley Sisters and Ted Ray.

‘I enjoyed the life,’ she recalls. Sometimes it meant taking part in three shows a day.

‘You would be in a show for six months, then that show would come off the road and you would audition for another show.’

Lilian danced professionally until she was 18.

She stopped dancing for 50 years. ‘I never thought about it,’ she says.

She had a busy life as a wife and mother and had about 30 different jobs including working in a dress shop, in offices and in sales.

It was love at first sight when Lilian met her husband Ron at a dance. ‘I walked through the door and saw him across the other side of the room,’ she says. They were engaged within three weeks and married in five months. The couple had one daughter.

Her husband Ron was a Managing Director. He died in 1996 when they were living in Minorca. After Lilian returned home she started ballroom dancing.

She moved into a bungalow at Lark Hill Village in 2010.

Lilian was in her late seventies when she started teaching tap dancing at the village. ‘It was lovely, I was giving something of myself and I knew I could do it easily. People really looked forward to it. It was like a social.’

Earlier this year she had to give it up because of her health. She suffers from Lymphoedema which causes swelling in her legs, restless leg syndrome, and an irregular heartbeat. She now walks with a stick.

She enjoys living at Lark Hill. ‘’I like the fact there’s always plenty of people about and everyone is willing to help me. That’s lovely,’ she says.

She still goes to the gym and volunteers on reception.

Lilian loved taking part in Old People’s Home for 4 Year Olds. ‘I liked the contact with the little ones,’ she says.

She did some tap dancing and wore a different outfit every day.