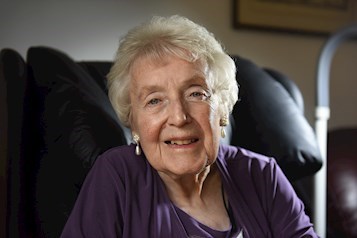 Lavinia Faulkner has around 200 owl ornaments and pictures. They decorate her bungalow at Lark Hill Village where a picture of her great-granddaughter takes pride of place on the living room wall.

Lavinia spent 20 years as a Brown Owl in the Brownies and was a conveynor for Cambridgeshire.

She can make hedgehogs out of paperback books and carnations out of serviettes. She loves craft so much that she is planning to help run a craft class at the village.

Lavinia was born in 1937, on Pancake Day. Her birthday wasn’t on Pancake Day again until she was 79 and so she celebrated, the chef made pancakes for her.

She spent her childhood in London during the war. She recalls a bomb dropping on the pub at the corner of the road.

‘We weren’t scared because it was somewhere to play the next day,’ she says. Her father was in the fire service. She remembers being the only child at school one day during The Blitz.

At 18 Lavinia met Len at the ice rink and they married three years later. The couple had two children. Lavinia worked as a teacher’s assistant in a school, and in libraries. When she retired she was a personnel officer in a hospital.

Lavinia and Len moved into Lark Hill Village four years ago. They wanted to be closer to their family. Lavinia was diagnosed with Parkinson’s 20 years ago and now uses a walker and a scooter.

Len died six weeks after the couple moved in.

Lavinia enjoys the peace of mind that comes with living at Lark Hill Village. ‘There’s always someone there when I want them,’ she says.

She also liked taking part in Old People’s Home for 4 Year Olds. The highlight for her was winning on sports day. She was on her scooter, holding the hand of one of the children.

‘It felt like the old days when I used to win at hockey,’ says Lavinia who is now 81. ‘I used to play hockey for the school. I like competing.’

And what does she think older people can learn from children? ‘How to be happy,’ she says.