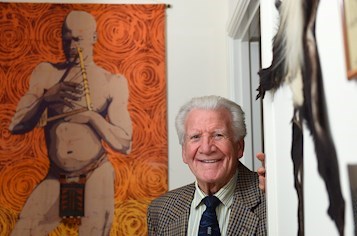 Ken Pidcock calls his bungalow at Lark Hill Village ‘Little Africa.’ African artefacts are everywhere, presents from the students he taught while he was there. On the living room wall there is a photograph of a lion, African art adorns the walls.

Ken and his wife Barbara, who was also a teacher, spent 15 years in Africa, and twenty years in Spain or its dependencies.

On the shelf are plates collected on their travels around the world.

It has been a life of adventure for Ken who has lived in more than 20 different homes.

Ken was the youngest of eleven children and the son of a miner.

‘When my father retired his last wage pack was six pounds a week,’ he says. His mother worked on a farm, leaving Ken in his pram at the side of the hedge.

‘We were very poor,’ he recalls. ‘I was brought up on cast off clothes. I rarely had anything new to put on because we were a big family.’

At the age of 11 Ken was working on the farm during weekends and holidays, saving money to help buy the football boots, sports kit and blazer that he needed for grammar school.

‘I used to do my homework on the bus or my spare periods because we all lived in the kitchen, and if I wanted to study I would have had to go into one of the front rooms. That meant we would have had to put a fire in there and switch on the light which was all expense.’

The couple moved to Lark Hill Village in 2009.

‘When we first came here we were the life and soul of the party,’ Ken recalls. I was on the residents committee, I joined the drama group and the music group and we started the whist group. Barbara played the piano.’

Then in 2013 Barbara died. ‘That changed my life completely,’ he says. ‘I took it very badly.’

During her illness Ken dropped out of activities and looked after her.

After her death he focused on writing a book about their life.

‘I became a hermit,’ he says. ‘I hardly went out for two years. We had made a lot of friends together. I didn’t realise how much I had depended on her for my social life. I found it very difficult.’

Ken, an 87-year-old great grandfather, was amazed when he was asked to take part in Old People’s Home for 4 Year Olds.

‘I was there to help the children. I didn’t think I could benefit,’ he says.

But he says taking part in the programme has given him confidence, brought him of out his shell.

‘Now I feel confident to do anything,’ he says.

Ken has had open heart surgery; he has two replacement knees and has had a mini stroke.

He says he wouldn’t want to live on his own. At Lark Hill Village, he knows he won’t be lonely. ‘I’m only a few yards away if I want company,’ he says. ‘It’s a wonderful place.’