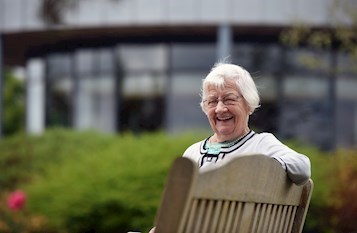 Ninety one-year-old great grandmother Kathleen Mayfield is no stranger to children. She brought up six of her own.

Kathleen, who now lives at Lark Hill Village, doesn’t remember that being hard work. But she says: ‘It was penny pinching a lot. My husband earned five pounds a week to keep us.’

Kathleen had an industrial sewing machine at home and used to take work from the factory, finding time to do it when the children were at school or the baby was asleep. She can recall a baby lying across her knee, tummy down, while she machined.

Kathleen and her husband Peter met when they were just 14. He was in the Boys’ Brigade and she was in Girl Guides and they met at the church youth club.

Peter died in 2000 and Kathleen was living alone when she moved to Lark Hill Village. ‘It sounded like the ideal place,’ she says.

Kathleen now volunteers on reception and enjoys going to the gym at the village. She also likes crocheting. She used to make some of the children’s clothes when they were growing up.

She loves spending time with children and says taking part in Old People’s Home for 4 Year Olds was ‘very enjoyable.’

‘I started school when I was four and I thought it would be interesting to see what children of four these days were like.’ She was surprised at how clever they were.

‘I was never allowed to read a newspaper when I was a child,’ she says. ‘We hadn’t a lot of money and I can’t remember having a book bought for me.’

Taking part in the programme reminded her of bringing up her own children.

‘I always found it a lot easier to involve my children if I wanted to keep an eye on them,’ she says. ‘If I was in the kitchen I’d give them a basin each and put a bit of custard powder in one and a bit of gravy powder in the other. I would give them a spoon and they would stir forever.’

She enjoyed getting to know the children and also the other people who took part in the programme.

‘Mixing with children makes you happier,’ she says. ‘They have a different perspective on life. It takes you out of yourself quite a bit.