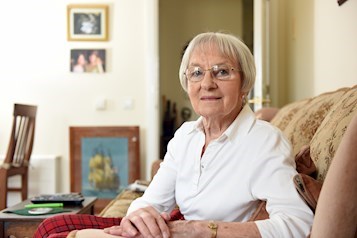 At 86 Beryl Poulson can still remember the wartime bombing raid that happened when she was a child.

‘It was dusk,’ she says. ‘I remember two German planes flew over quite low. We heard them coming and everybody ran out to have a look.’

A house nearby was bombed and Beryl remembers walking over the fields to where the house had been.

‘All we could see was a hole in the ground,’ she recalls.

Beryl, who now lives in an apartment at Lark Hill Village, was an only child. Her father worked for a munitions factory. ‘He worked very long hours,’ she says.

During her career Beryl worked as a school secretary and as a medical secretary.

She met her husband Bob at a dance when she was just 17. ‘When he was doing his national service for two years I sat at home embroidering and didn’t go out dancing,’ she recalls.

She still has the embroidered tablecloths in a drawer in her apartment.

Beryl and Bob had two children. They had been married for more than 50 years when Bob died in 2007.

Beryl, who is a grandmother, moved into Lark Hill Village in 2015. She is happy living in the village and says: ‘I wouldn’t want to live anywhere else.

‘I began socialising more than I did when I lived on my own because it was so much easier.

‘Everything is under one roof and you can have a good social life without putting your hat and coat on.’

She plays bowls and bridge and enjoys events at the village.

‘It was another opportunity to mix and get to know people,’ she says.

‘The children were lovely.

‘I thoroughly enjoyed every day.’