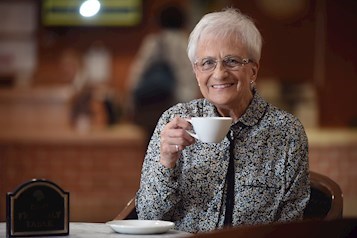 When Barbara Webb was a child the doctor warned she may not live past the age of five. She was in hospital regularly during her early years. She had pneumonia, and when she was a year old she had polio which affected her arm and leg and meant she was in an iron lung for six months.

Now at 81 Barbara is living at Lark Hill Village along with her 86-year-old husband Arthur.

The couple met when Barbara was an auburn-haired 16-year-old teenager. ‘I was sitting on my parents’ doorstep crying because my boyfriend had fallen out with me,’ she recalls.

Arthur, a handsome young man, walked down the street where she lived. He was just out of the army. As soon as he saw Barbara he decided he was going to marry her. They married when she was 17.

The couple had a son who was premature and died when he was just 11 hours old. They became foster parents and adopted a daughter.

Barbara and Arthur moved just twice, and lived in the same three bedroom house for 46 years, before moving to a two bedroom bungalow at Lark Hill Village in 2009.

‘We get on with everybody,’ says Barbara. ‘I have made lots of friends. I have been very happy here.’

Barbara, who doesn’t have grandchildren, says she enjoyed every minute of taking part in Old People’s Home for 4 Year Olds.

‘I didn’t feel I was as old as I am,’ she says. ‘I felt a lot younger. I always felt really privileged to be able to be with the children. They all had their own personalities. I learnt a lot from them. My husband says I’m the biggest worrier in the village; I worry too much about everything. The children taught me not to keep worrying all the time. Now I have started to enjoy myself more and realise there is more to life than worrying.’