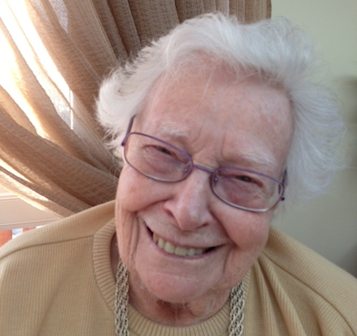 Pam Rossiter knows about care. She spent her career in social work. Now in her eighties, she is receiving care and is full of praise for the team at ExtraCare's Humber Court Retirement Scheme in Coventry where she has lived for the last two years.

It was Pam's career that first brought her to Coventry in 1962 - and she had a busy life. As her career progressed she held key roles and also responsibility for other social workers in the city.

She enjoyed her job and the contact with people. 'I was always a fairly outgoing character,' she recalls.

She also had a full social life; meeting friends, and enjoying music. It was at a concert at Coventry Cathedral that she met her future husband Basil who was Deputy City Architect. 'I knew him by sight, no more than that,' she says. 'I plonked myself down beside him because I wanted someone to talk to.'

They married in 1972 'much to everybody's surprise,' says Pam. 'We were both 51 and neither of us had been married before.'  And they moved into their first home together, along with Pam's mother who had been living with her.

Pam carried on living in the same house after Basil died in 1991. 'Eventually the garden was too big and I couldn't see myself doing it,' she says. 'I looked around for accommodation and settled on a flat in Earlsdon and there I stayed until I moved here.'

Pam already knew Humber Court. Her husband was a council representative, involved in the early planning of the site, and she had also visited a friend who had lived in the retirement scheme.

'I was beginning to find life difficult on my own,' says Pam, who has osteoporosis in her back. 'It was difficult to get about. I could see it wasn't going to get any better and it was, if anything, going to get worse. I needed to look ahead and plan in case I ended up in a wheelchair. That was in the back of my mind when I decided to move to ExtraCare.'

Pam moved into her cosy one bedroomed apartment in November 2010. There are 46 one bedroomed homes, in Humber Court, each with living room, kitchen and shower room. Properties are available for rent. Facilities include a hairdressers, library and restaurant.

Pam says the care she receives is 'extremely good.' 'It is not condescending, it is a friendship sort of care which is very nice,' she says. 'I'm still in a fair bit of pain all the time but it's what you expect with my sort of problem. You get used to it in the end. You have to adapt.'

She still drives a car and goes to church and out shopping and to see friends and she also enjoys the quizzes and musical events at Humber Court.

'The ethos of the whole place is caring,' she says. 'It's what it's all about. That's why it's called ExtraCare.'

For further information on any of these case studies, please contact: