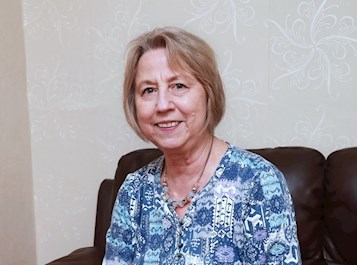 Great grandmother Yvonne Jack was just 16 when she met Neville who had recently arrived from the Caribbean island of Saint Vincent.

When she was 17 they were married, and their first home was a rented single room with a shared bathroom.

Yvonne still recalls how fantastic it was to move into the three bedroomed semi-detached house where she still lives now.

That was more than 40 years ago; the house became the family home, where they brought up their four children. ‘My husband dug the garden and put vegetables in.’ Yvonne recalls. ‘I didn’t want to move again.

It was only when the children grew up and moved out that Yvonne decided it was time to downsize.

She realised that her and Neville were getting older, and she didn’t want to be a burden on the children, although they were always there for their parents.

There are steps up to the front door of her house. ‘I said we were getting on and we might not make the steps,’ she recalls. ‘I’ve always had quite a bit of energy. I thought one day I would have to slow down. You have to think of the future.’

The couple read about Hughenden Gardens Retirement Village and decided they were interested in moving in. Neville had worked at the BroomWade factory, which was on the site of the new village.

‘Neville was very kind. If ever I wanted anything instead of telling him I’d drop hints and before I knew it I would have it,’ Yvonne recalls. ‘He would listen, he would remember. We talked about it a lot. I think he was quite excited about the village.’

Sadly Neville died of cancer in June 2016, aged 77. And Yvonne is happy to buy a one bedroom apartment in the village, where she now lives alone.

She says there have been times when she felt devastated with loneliness without Neville, who was at her side for more than 50 years.

She remembers how he would sit in the living room on a Saturday, the smell of her baking wafting in from the kitchen, enjoying her warm scones straight from the oven. He was always supportive, if she ran out of ingredients for her cakes he would go to town to buy them for her. Now there’s no-one to eat her scones, living on her own there’s no-one to talk to. ‘The kids come as much as they can but they’ve got their own lives,’ she says.

The house always felt like home. But she says ‘I don’t feel like I belong there anymore.

‘I am really sad that Neville is not living here with me but it is definitely the right time.’

Yvonne is looking forward to making new friends at Hughenden Gardens Village. ‘I’m a talker, I chat to everybody,’ she says. ‘The village suits me. It must be so interesting to be able to meet new people.’

She is hoping to take part in activities without having to leave the village or go out in the dark at night. ‘There’s so much to do,’ she says.

‘It’s starting again really. I've taken take all my memories with me.’