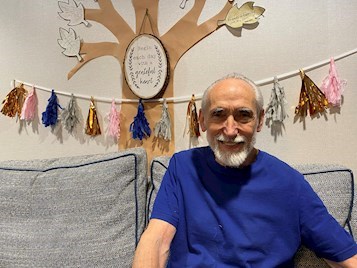 Here he tells us in his own words what life has been like for him at Hughenden Gardens and why it was the right move for him.

Life prior to retiring saw Stuart working in the RAF as an air traffic controller and as a finance manager for Thames Water. Whilst he was living in a flat on the outskirts of High Wycombe, Stuart’s daughter suggested he visit Hughenden Gardens after seeing the village advertised in the newspaper. Stuart attended an open day at the village with his children and grandchildren. He tells us why Hughenden Gardens has been the right choice for him.

“When I first arrived at Hughenden Gardens I visited the apartment which later became mine. I got to the balcony and stared out, I thought it was a beautiful view. I spent the next eight months walking from my old flat to the village every Thursday to play Bridge to get a feel for the place before I moved in.

When I moved in I thought it was great. It was a big change and I wasn’t feeling my normal self so it was very helpful to meet people there.

I went to as many functions as I could. Dementia and Mental Wellbeing Enabler Gabriella invited me to a Tuesday group called ‘Time Together’. It’s a resident group to chat and interact. It was great, we were all roughly the same age, it was fun casting the mind back and partaking in exercises and activities. We are still doing it now!

I immediately became a volunteer when I started living here. I carried out door monitoring of visitors signing in, helping to keep things secure. I also get a lot of positive feelings when I visit other residents in their apartment and help them get to their groups or make them a cup of tea. I used to do that for my grandmother when she had dementia, so it feels good to help others.

One of the main reasons so many people live in the village is that they all feel the same way as I do about staff particularly Gabriella.

The view from my apartment is my favourite thing about living here. I can see right across Wycombe, the entire horizon is trees because I’m on the 5th floor. I love the view, late at night I will stand out here and look at the stars it’s very relaxing. Where I lived previously, I had no view of anything but buildings, you were closed in.

I feel very much safer living at Hughenden Gardens, if I could describe it in one word it would be ‘comfortable’.

If you are looking to move in, my advice would be to see if you can communicate with others who have lived here, read their stories before to understand what they think of the place.

Moving here has been so much better than my previous flat, I simply didn’t have the community there. Hughenden Gardens itself is a nice building to live in, and relatively new, when I first walked in I thought it looked like a hotel it was rather nice. Having regular contact with the group we have here is also deeply appreciated. We all enjoy a chat, and spending time together.”