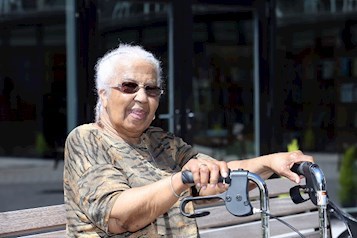 “I am so happy,” says great-grandmother Winifred McLaren, whose life has been transformed since she moved into ExtraCare’s Hagley Road Village.

Winifred didn’t want to go into residential care and was determined to live in the Village. She felt she was able to choose for herself where she wanted to live.

In February 2014, Winifred moved into a one bedroomed apartment. She is managing well, living on her own with the support of a care package.

“I am not one to sit down,” says Winifred, who has had an operation on her spine and on her knee. When she moved into the Village she was in a wheelchair but with the help of physiotherapy is now walking with a three wheeled walker.

“The environment and the physiotherapy input has made such a difference,” said Suzanne Jones, Care Manager at Hagley Road Village.

Winifred was married for 50 years before she was widowed four years ago. She has led an active life. She moved from Jamaica when she was 29 and worked in a factory and in a hospital and then became a foster carer. She wanted to keep her independence.

“I used to be all over with shopping trolley,” she says. “I’d get on a bus and I’d go anywhere. I am an outdoor person. I like going out, I like the theatre and the cinema.

“You don’t want to be a burden, if you can help yourself. I never used to depend on anyone.”

Winifred now has care four times during the day.

“All the carers are lovely,” she says. “They cheer you up and make you feel good within yourself. It is very nice here. Everybody is so polite. Each person you pass says ‘good morning’ or ‘hello’ and it makes so much difference. It makes you feel so much better. You can have a little talk and a little laugh. I feel so content.”