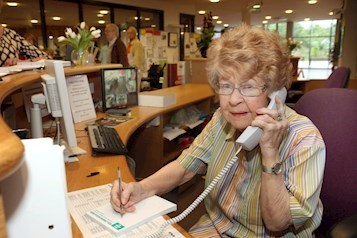 Sheila Harris retired from her job in the department of space research at Birmingham University 21 years ago. Now in her eighties, she is volunteering as a receptionist at Hagley Road Retirement Village.

"Being inquisitive, I thought it would suit me very well," she says. "I get to know everybody. Everybody stops to say hello.

"I was used to meeting and greeting people when I was a secretary at the university. I met all sorts of people, including astronauts."

Sheila has held other voluntary roles in the past, including being a Samaritan. She moved out of her second floor flat into an apartment at Hagley Road Village last October

"I have rheumatoid arthritis. I can no longer knit or embroider or type," she says. "I thought that it would be perfect to sit behind the counter on reception, answering the phone.

"I think volunteering is good because it means you do mix with people. It is good to feel that I am contributing to the life of the Village."

For further information or to arrange interviews, please contact: