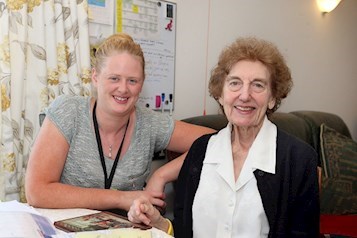 June, who lives at Hagley Road Village, has Alzheimer's disease, which is the most common type of dementia, affecting almost 500,000 people in the UK.

June Gibbs can remember her childhood in detail; she talks about how the air raid shelter was flooded, how she came top of the class at school. In fact she can recall those early years in her life better than she remembers yesterday.

The mother of four, now in her eighties, was diagnosed a few years ago and it was her family who first noticed that something was wrong, that she had become forgetful.

June says: ‘I’m very accepting of the fact I have dementia. I hope it doesn’t get any worse. It can be a little frustrating at times if I think about it. It doesn’t worry me much because I don’t have to remember a lot.’

June moved to the Village last October shortly after her husband died. She left her four bedroomed house to move into a two bedroomed apartment.

‘The house was much too big,’ she says. ‘I was much too lonely to be left on my own and not safe because of the stairs. I slipped down the stairs one day and bumped my head. I liked Hagley Road Village as soon as I visited.’

When she first moved in she couldn’t find her way around and Carol, the Locksmith, used to collect her to go to activities. Then Carol made some direction cards which June now keeps in her handbag to help her find her way to the centre of the Village and back again. There’s a sign on her the door of her apartment which says: ‘don’t forget your direction cards.’ June, a former rambler, now finds it easier to get around using the cards.

Carol has also made a calendar which is next to June’s television and lists what she is doing that day. She looks at it when she gets up in the morning. June also writes what she has done every day in her diary. She has care twice a day.

‘I like to join in with all the activities, like the social club, and reminiscence group,’ she says. ‘I like to go to Tai Chi and IT and coffee mornings for a chat. I also like ballroom dancing- I used to do ballroom dancing and have bronze silver and gold medals. Today I went to a barbecue and music concert and sat in the sun and chatted.

‘I don’t think about the future really, I try not to. I like to live in the present.’