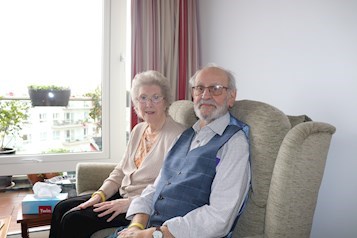 Richard Charles Whittington, otherwise known as Dick, 84, and his wife Beryl, 85, moved to Bournville Gardens Village over three years ago. Dick explains the benefits of living here and owning their own flat:

'We moved from Kings Norton where we lived for 47 years and brought up three boys. All three of our sons have since moved away, our eldest lives in Wellington, New Zealand, our middle son in Victoria, Canada, and our youngest in North Derbyshire. It was a biggish semi-detached house with a large garden. It was about twelve months or so before we moved that we realised that the house was starting to become too much work.

Beryl has osteoporosis in the spine and a couple of damaged vertebrae and is therefore limited in what she can do. I have had both hips replaced twice. I have a lot of weakness in my limbs and lots of scarring. So living in a fairly big house was becoming more than we could manage. But I had to convince Beryl that it would be much less demanding here.

She was emotionally tied to our former home and found it difficult to cope with the move right-away. I moved around a lot as a child. I grew up in a family where my father was employed in banking, a career that led us to move from place to place which meant I had learned to cope with new houses and new areas. It was just the way life was. So for me, this was just another move. Beryl on the other hand was born in Nottingham and until we were married, in 1957, had always lived in a five mile radius of her family.

But now that we’re here, Beryl joins in more than I do! She also uses the gym occasionally, particularly the bike and treadmill. When we first moved I was volunteering three to four mornings a week as assistant chef in the kitchen. I will never forget the first task! I was handed a sack of sprouts and asked to “prepare these”.  Both of us have been involved in voluntary work previously, Beryl in the Guides and then Cubs, and I was a canoeing instructor in the Scouts.

Living here has come with its benefits, mainly because there is far less physical work to do, it’s also warm and comfortable. During the latter part in Kings Norton we had cleaners, and we’ve kept them here too. There is a lack of required effort so while we may have felt the impact of ageing had we stayed put, we’re feeling less bad.

One of the biggest attractions over the other semi-similar providers for choosing to live here is that when the time comes to leave, there will be no property to sell. There will be no continuing charges levied against us and our estate, we will simply surrender the lease.

Our sons are also happy that we are here, as there is care available on site should we ever need it and there’ll be no need to worry about selling when we move on. I am diabetic and my daughter in law is a hospital consultant so fully understands the medical problems we both face with growing older so the village gives them piece of mind.

Everybody is friendly, even if you don’t know them you can say “hello” or “good morning”. Everybody is supportive of each other. If you have a problem, you only need to knock on someone’s door and you’ll be greeted by a friendly face and vice versa, we’d welcome our fellow residents to knock on our door in a time of need. Although we’re a community of 300, we live in little avenues, so we have a built a very supportive network just in our avenue.

If someone is considering moving to an ExtraCare village, I would say go with an open mind. But also, because there is so much going on, take things easy at first.'

Find out more about Bournville Gardens