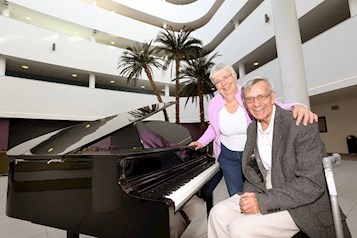 The kitchen table was the hardest to give away. It had been in the house for 40 years and held so many memories.

It was where the children dumped their bags when they came home from school, it was where they had a drink and a chat about what they had done that day, and did their homework. It held memories of happy dinners with family and friends, and Christmas lunches, all sitting around it together.

When the children grew up the table was moved into the dining room. And now Michael and Maureen Rickards have given the eight feet long pine table to charity.

They downsized in November 2015, moving from their three bedroom detached house into a two bedroom apartment in Bournville Gardens.

They have lived in their house for 47 years, ever since their son, the eldest of their two children, was a baby. ‘It has always been the family house,’ says Maureen, a former primary school teacher. But she says they are ready to move.

‘It’s a new adventure for us,’ she says. ‘It’s a question of looking forward.’

Michael, now in his seventies, had a stroke when he was 39 and Maureen says it made them realise that life can be uncertain.

‘You just don’t know what’s going to happen,’ she says. ‘One day Michael was fine and the next day he wasn’t. If I die first, Michael won’t be on his own and he’ll be supported, he’ll have the care he needs.

‘I care for him at the moment, but you never know. I may need care in the future, or I might die first. He doesn’t speak very well, and he has weakness down his right side. If he was by himself, he wouldn’t be able to manage.

‘We’ve got children who would help him pay the bills, but he wouldn’t be able to do things like prepare meals if I wasn’t there. The care team could do that for him, or he could go to the restaurant.

‘The whole concept of having everything on site is perfect. Even if you don’t drive, you can still have a life.’

Maureen says it also became more difficult for her to look after the house. ‘You have to spend money on a house to keep it nice and it gets to the point when you think: “I’d rather spend money on us than on the house,” ’ she says. ‘There are a lot of young people in the road and you lose contact with people of your own age.’

She couldn’t wait to move into her new home. ‘The apartment is gorgeous, the building is lovely, and the people are nice,’ says Maureen. ‘We have already made friends.’

The couple left behind their long garden, where the children used to play in the sandpit and on the swing. Instead the balcony of their new apartment looks out over the gardens at Bournville Gardens.

‘There are beautiful gardens and someone else can look after them,’ she says. ‘We can just look at them; we don’t have to do anything.’

She is making plans already and even dressed as an elf at the Christmas Fair at Bournville Gardens!

As for the table, that has gone to Headway, the charity that works to improve life after brain injury. Maureen and Michael have bought a smaller oak table that they can extend when they need to. Maureen says it is cosy sitting at it together.

‘I hope the people who come here will be as happy as we’ve been,’ she says. ‘When we closed the door we went to Bournville Gardens and I will not look back. It’s a new home with new beginnings.’